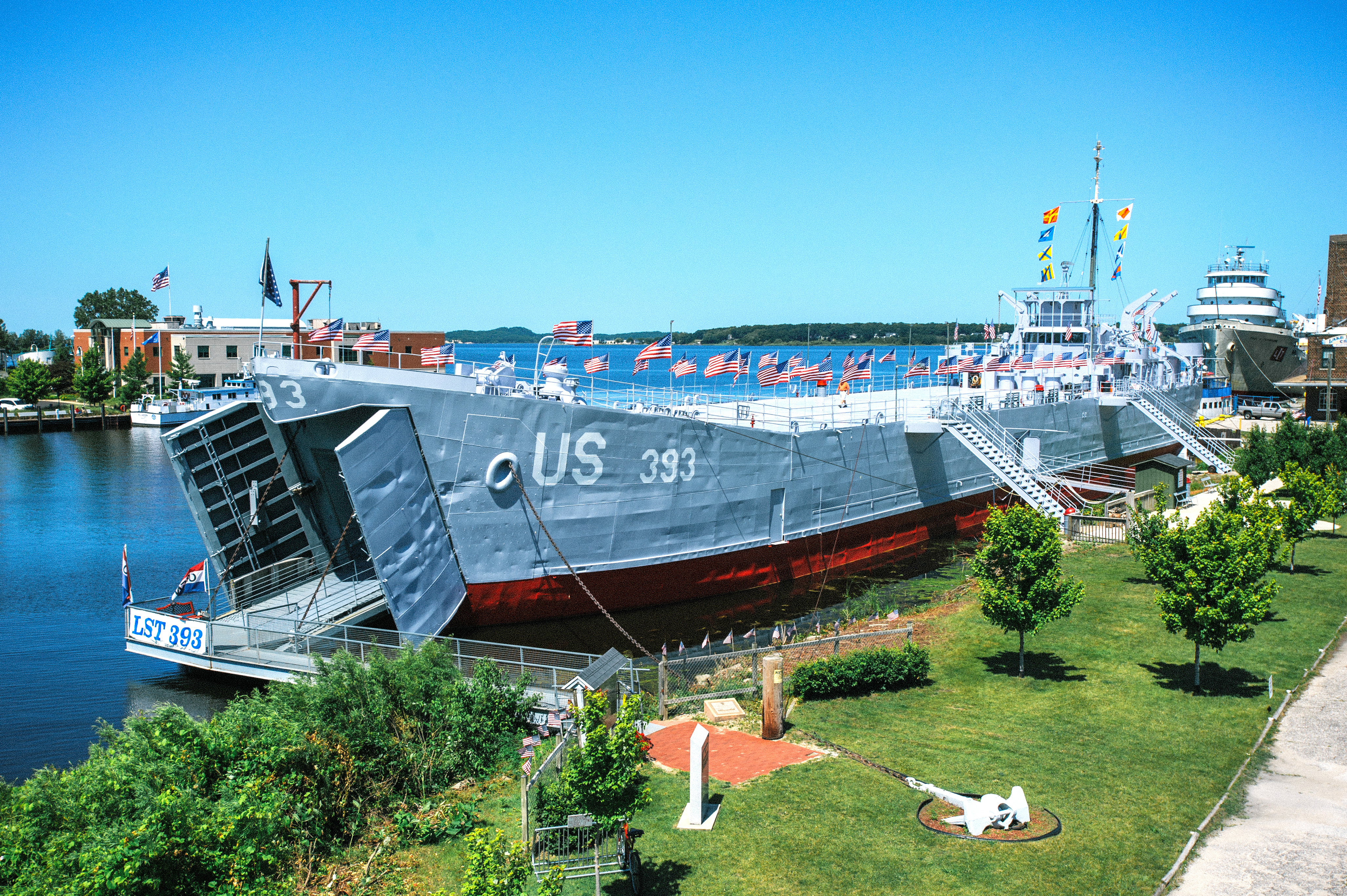 USS LST-393
683 Shoreline Dr, Muskegon, MI 49440, USA
The historic warship – a “landing ship tank” moored at the Mart Dock on the Muskegon waterfront – is now the USS LST 393 Veterans Museum, restored and operated by a group of dedicated volunteers. It offers tours to view renovated areas of the ship and museum exhibits; it also hosts a wide variety of events and memorials. The museum is open May to September. June kicks off with “D-Day Plus 73” community celebration. The event will be highlighted by dozens of World War II reenactors with authentic military garb and weaponry defending LST 393 in “Air Raid Muskegon” during a Warbird flyover. There will be a Friday night “USO dance,” many historic military vehicles, a National Guard encampment, classic cars, a motorcycle honor ride, food vendors, and a 1940s-era pinup contest (family friendly). There is no admission charge to the grounds or the museum, but donations are gladly accepted. Visitors will see many new exhibits and veteran tributes when the museum opens, including a newly donated collection of 150 helmets from armies around the world, a huge Army cargo truck of the type carried by LSTs and new additions to the “Muskegon Connection” display. Last year, more than 35,000 visitors toured the ship or attended the numerous ship events, making LST 393 one of the top attractions in Muskegon. The Movies on Deck series starts in June and shows classic films most Friday nights throughout the summer, although one of the June movies will be shown on a Saturday night. This year’s films include “Shrek,” “The Sting” and “Monuments Men.” The movies start after sunset on the ship’s top deck; there is no admission charge but donations are accepted. Upgraded displays inside the ship tell the stories of the soldiers, sailors, Marines and Coastguardsmen who served aboard LSTs; LST 393 is one of only two left in America out of 1,051 built. The ship’s bridge has been completely restored, as well as the galley, officers’ quarters, wardroom, sick bay and mess deck. A trip down to the engine room is a must for those who have an interest in awesome machinery. Among the exhibits is the “Hall of Uniforms.” Three compartments of the ship have been revamped for a display of authentic uniforms donated by Muskegon veterans. They represent all branches of the armed forces and have come from veterans of five wars and seven decades of service. Visitors can view the “Homefront Muskegon” display, honoring those who supported the troops at home. Also on display is a main battle tank engine on loan from L-3 Corporation of Muskegon. The Vietnam Memorial Wall honors those from West Michigan who gave their all for their country in Southeast Asia. The wall contains a unique collection of Vietnam Conflict memorabilia as well as the photos of the more than 50 Muskegon County service personnel who died. Also honored are servicemen who died in Iraq and Afghanistan. There is also a newly expanded section to commemorate those who served in Korea. Adults can take a self-guided tour of the ship for a $10 donation; students are $5. Volunteers are always on hand to answer questions about the ship and the museum displays. A large gift shop offers a variety of ship mementos. The museum membership program continues this year. Individual membership go for as little as $25 per year; families can sign up for $40. Members can tour as often as they like, get special gifts and also get free popcorn at Movies on Deck. LST 393 was built in 1942 to help America defeat the Axis powers in World War II. She was at the Sicily and Italy landings and made 30 round trips to Omaha Beach during the invasion of Normandy, delivering weapons of war. Sold as surplus in 1946 to Sand Products Inc., owners of West Michigan Dock and Market in Muskegon, she was converted to a cross-lake freighter called Highway 16 and was a fixture on Lake Michigan for three decades. She was retired from service in the 1970s. LST 393 is located at the Mart Dock adjacent to Heritage Landing county park on the downtown Muskegon waterfront. (Description provided courtesy of the USS LST-393 Preservation Association)
USS Silversides (SS-236)

Since the Silversides became a museum, she has been lovingly care for by her volunteers. The ship is in immaculate condition. Amazingly, the museum is available 7 days a week 365 days a year. While visiting the museum, visitors should be sure to save some extra time to view the U.S. Coast Guard Cutter McLane The McLane has an amazing history with the Coast Guard which lasted through the Prohibition era. Dont miss out on touring this one. 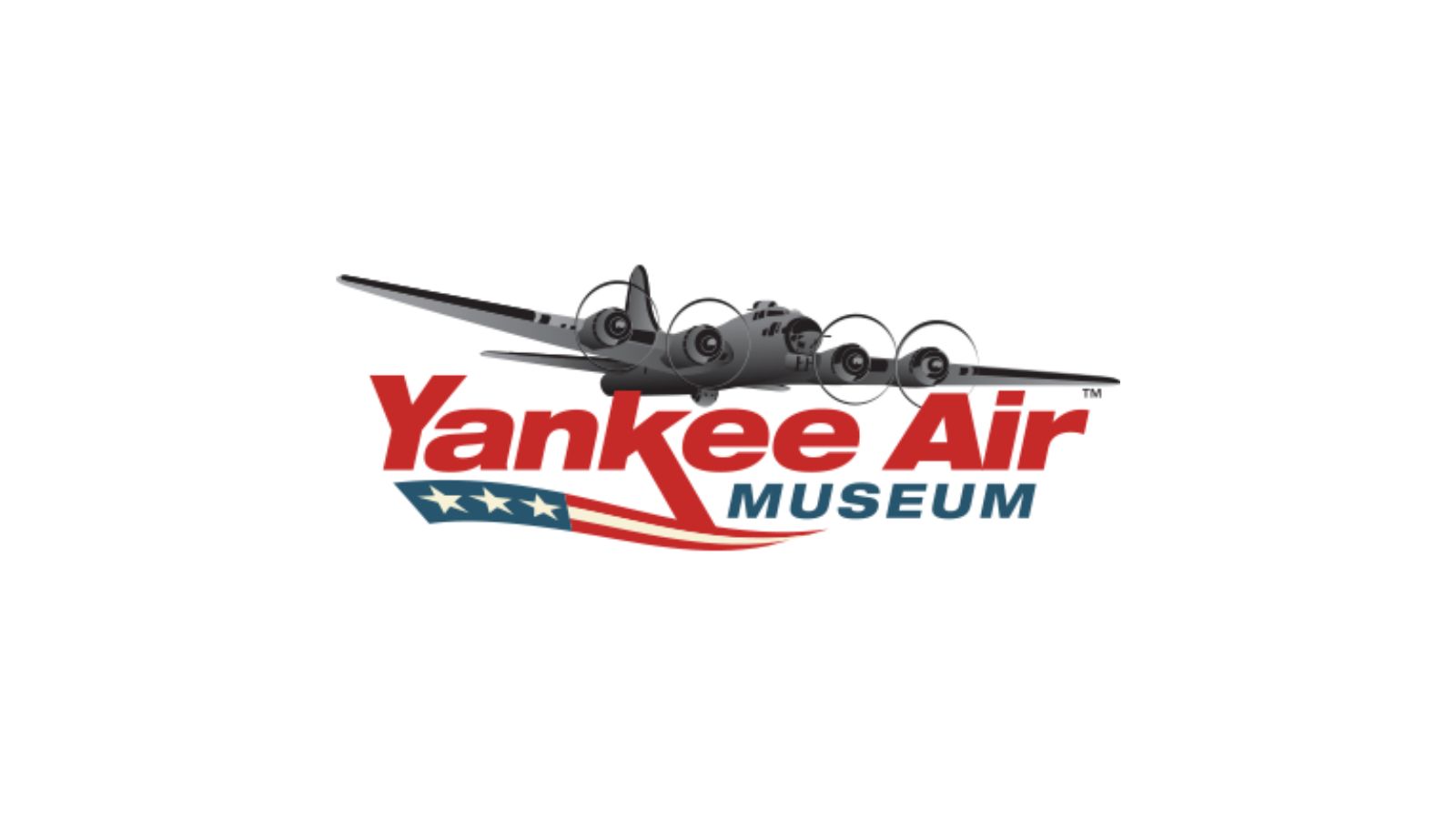 The Yankee Air Museum is an incredible destination for anyone interested in aviation and aerospace history. Located at the historic Willow Run Airport near Ypsilanti, Michigan, it showcases the incredible legacy of aviation technology developed in the state over the past century.

Established in 1981, Yankee Air Museum was created to preserve, restore and display vintage military aircraft. As one of the nation’s largest flying collections of historic aircraft, visitors can explore classic World War II bombers such as a B-17 Flying Fortress, B-25 Mitchell Bomber and P-51 Mustang Fighter. The museum also has several restored helicopters on display including a CH-46 Sea Knight. In addition to its iconic airplanes and helicopters, other warbird aircraft includes a Lockheed PV-2 Harpoon Torpedo Bomber and North American T-6 Texan trainer plane.

The Yankee Air Museum not only plays host to these impressive aviation artifacts but also serves as an educational institution with exhibits and activities designed to educate people about aviation history. The museum features interactive displays that highlight advancements made in flight technology throughout history as well as preservation projects that help maintain classic aircraft for future generations to enjoy.

Other areas of the museum highlight specific aspects of aviation history such as special tributes to military veterans who served their country through service in the armed forces or as test pilots at Willow Run Airport during WWII. The museum often hosts special events like air shows featuring performances from stunt planes or historical reenactments that bring patrons closer to the experience of being a pilot in yesteryear’s skies.

The Yankee Air Museum stands out among other historical attractions by combining its impressive collection of vintage aircraft with interactive educational programs designed to bring historical events alive for its visitors. It offers something for everyone – from those looking for more information about aviation history to families desiring interactive experiences that will keep kids engaged while learning valuable lessons about our nation’s past. By taking advantage of all this destination has to offer, guests will find themselves immersed in an unforgettable experience celebrating America’s rich heritage of innovation and progress through air power!