History of the LST - From Normandy to Museum 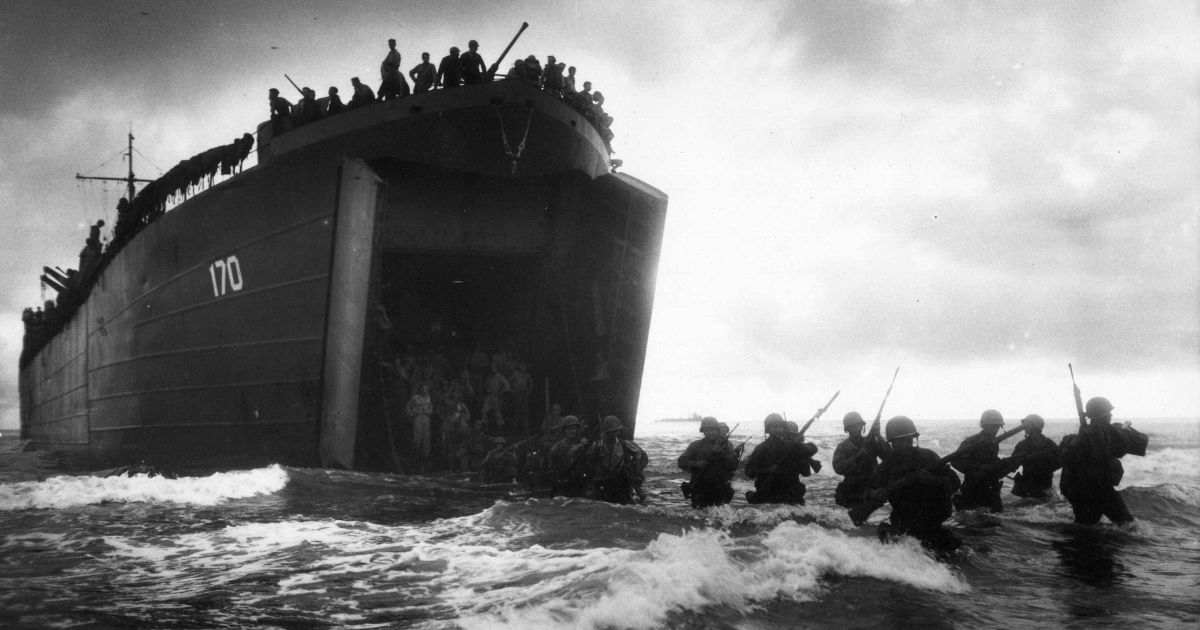 Most histories of naval combat in WWII focus on the exploits of battleships, and carrier-based aircraft. People often forget the key to successful military operations is logistics. For the US and allied navies, the workhorse of the logistics train was the Tank Landing Ship or LST for short. The role of the LSTs in winning the war for the allies cannot be underestimated. These ships carried the bulk of military cargo for amphibious operations.

The LST came into existence in 1941 between the meeting of the free world's leaders, including President Roosevelt and Winston Churchill. During this meeting, the pair ironed out the details of the Lend-Lease program. Among those details was that American shipyards were to produce the majority of the logistics shipping. This allowed British shipyards to focus on manufacturing surface combatants for the Royal Navy.
The American government agreed to these terms and went about designing a craft right away. However, designing a vessel capable of carrying war material was no easy task.

For the ship to be of any use, it first had to have a shallow enough draft to beach itself. The ship also needed a deep enough draft for transoceanic voyages. To solve this problem, designers turned to an already familiar and ingenious idea.

How Did LST's Operate

To solve another issue when beaching itself was to ensure that the crew would not foul the propellers. For cargo operations to be successful, the ship would have to back out under its own power. This is made possible by using the stern anchor as a fulcrum. This maneuver would leave an unprotected propeller very vulnerable to fouling. Engineers fixed this problem by creating shrouds around the propellers for protection.

While these may have solved the ship handling aspects, the cargo operations were another story. Crews needed to increase the speed of offloading equipment. It was standard practice to have the engines running before discharging equipment down the bow ramp. Because of this, the LST would need a maze of ventilation systems. This is to keep the exhaust from choking the passengers and crew of the vessel.

As the war progress, improvements to the LST were implemented in later hull numbers. One improvement was the removal of the cargo elevator. For the first LSTs built, there was a cargo elevator that would take lighter vehicles into the main vehicle storage area to drive off the bow ramp. LST-491 and onward incorporated a simple ramp. The ramp allowed faster offloading by letting vehicles drive down from the upper to lower decks.

Due to the severe damage that beaching operations did to the hull, an LST could only perform an average of about ten landings. Beyond this, the ship was too damaged to do any more. The Navy would then put these vessels to use in other capacities. LST's were repurposed for carrying bulk cargo between ports, serving as berthing barges or floating hospitals, and any other tasks the allies needed.

All these lessons learned in cargo operations were only possible because of the service of the first few hundred LSTs produced. Among these were LSTs 325 and 393. Both of these vessels served in the Mediterranean and European theater of operations for the duration of the war. These two LSTs are the sole surviving, operable LSTs left in the United States. LST-325 berthed in Evansville, Indiana, and LST-393 moored in Muskegon, Michigan. These vessels bore witness to some of the war's key moments in Europe and serve as a testament to the bravery and steadfastness of the sailors who manned these warships.

Construction on LST-325 began in Philadelphia in the summer of 1942. Entering the fleet in February 1943, she set sail for her first of many transatlantic voyages after completing her shakedown cruise in Little Creek, Virginia. Her first cargo was a full load of soldiers bound for Oran in North Africa.

Her first taste of combat came that July when she participated in offloading men and material for the invasion of Sicily. Two months later, she received her baptism of fire during the allied landings at Palermo, Italy. German fighter aircraft made several runs at the ship and managed to strafe her at least once. The attack injured several sailors, but no one was killed.

Her next engagement came when she was on her way into port in southern England in November 1943. The convoy she was a part of came under attack by radio-guided missiles, possibly the Henschel Hs 293 type guided bombs. These bombs sank several merchant vessels. In addition, numerous submarine contacts were sighted, but the convoy made no engagements for underwater contacts.

After this hazardous journey, LST-325 had no further engagements, but her heroics did not end there. She participated in the D-Day invasion by coming ashore on D-Day +1. During her normal England to France route, in October 1944, she saved the stricken crew of LST-512. LST-512, damaged by years of beach landings, broke apart in a storm.

LST-325 would continue serving in the European theater of operations until March 1945. Before shipping back to the Pacific, LST-325 went stateside for a much-needed overhaul. After completing repairs in Louisiana, she set sail on August 2, 1945, for the Pacific theater, but en route, hostilities ended. With that, she went into port at Mayport, Florida, to be decommissioned. She would eventually be recommissioned into the US Navy again for a short while during the 1950s and then sold to the Greek Navy. Upon her decommissioning from the Greek Navy in the 1990s, she was bought as a museum ship and sailed back to Evansville, Indiana, where she sits today.

LST-393 started to come to life in the summer of 1942 and was commissioned in December 1942 in Newport News, Virginia. Just like LST-325, she spent her entire career in the Mediterranean and European waters. Her first taste of action also came at Palermo, but her experience was much more intense than LST-325’s was.

From September 7 to September 12, 1943, LST-393 endured neat constant shellfire from German shore batteries. Though none hit the ship, there were plenty of near misses. German assaults also came from the air. LST-393 and other ships in the vicinity were constantly firing their AA guns. On one occasion, LST-393 assisted in downing at least one German fighter.

After leaving the Palermo beachhead, she went back to make runs between English ports. On Christmas Eve 1943, on a routine convoy, LST-393 sighted enemy U-Boats not even 5,000 yards away from her. After setting General Quarters and firing a smoke screen, the enemy U-Boats disappeared and broke off the attack. Fortunately for the crew, The U-Boat fired no torpedoes that night.

LST-393's war service continued much like LST-325, and she, too, landed on D-Day +1 to deliver a load of British soldiers and jeeps on Juno beach. After that, LST-393 made continual runs between England and northern France. During her entire time in the theater, LST-393 delivered 9135 personnel and 3248 vehicles among 38 different ports. She also brought back 5374 prisoners of war into captivity, along with evacuating 817 casualties.

Because of her almost constant service, LST-393 pulled back from the theater in April 1945 to begin refitting in Louisiana. Like LST-324, LST-393 was destined for the warmer waters of the Pacific, but that would never happen. LST-393 was decommissioned and converted to a merchant car carrier on Lake Michigan. She operated in this capacity for years until she was purchased by a veterans group, restored, and became a museum ship in 2007.

About the author Michael Taylor:
Michael Taylor is an active-duty Naval Officer, writer, historian, and lover of all things military history related. Though considering himself more of a generalist, he has a special affinity for the Civil War and both World Wars. He is happily married to his wonderful wife Pam.