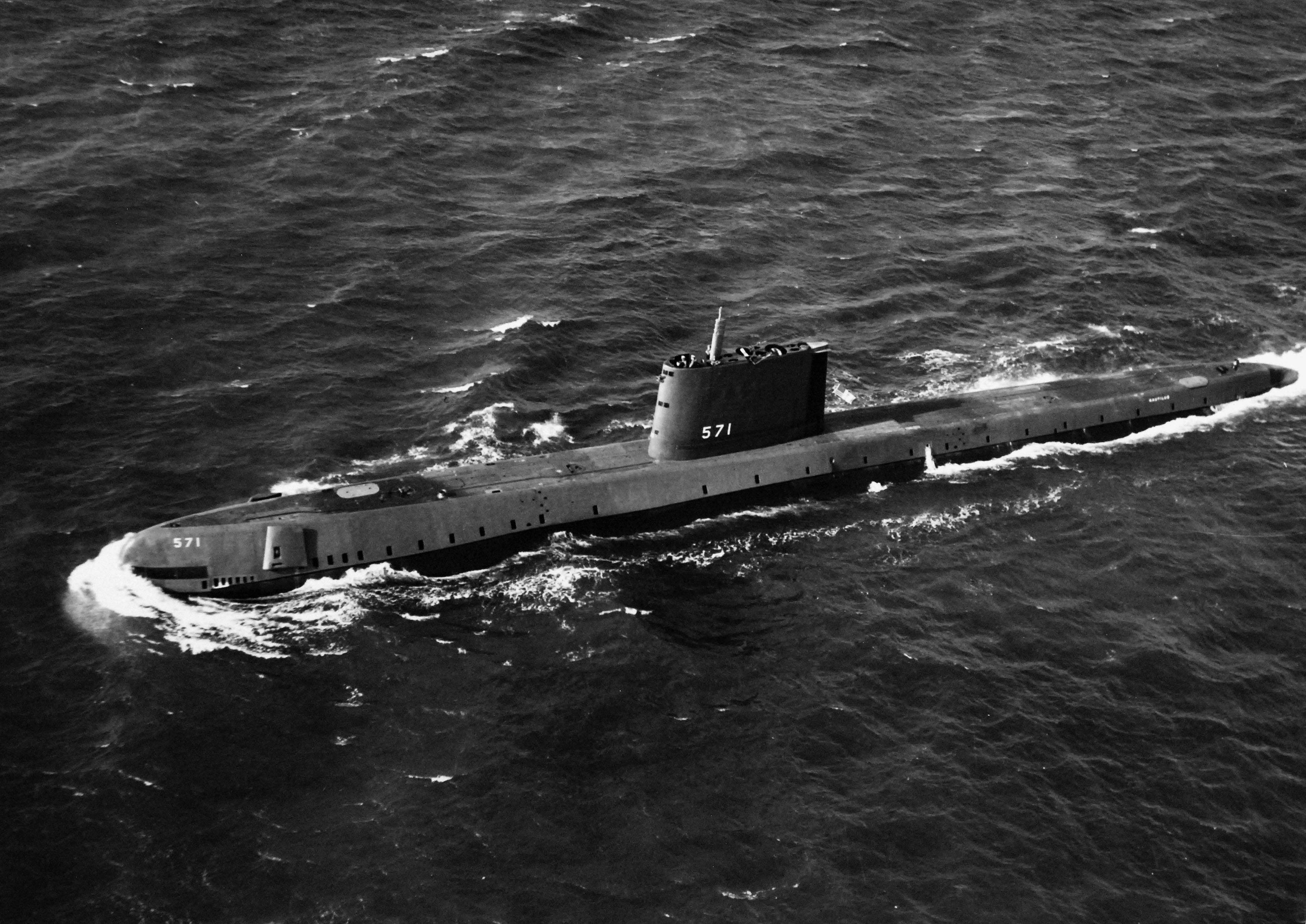 On the morning of January 17, 1955, Commander Eugene P. Wilkinson, first captain of the new U.S.S. Nautilus sent a memorable and historic message, “Underway On Nuclear Power.”

The “nuclear” Nautilus was the sixth ship of the U.S.  Navy to bear that name. As part of the Manhattan Project, which produced the world’s first atomic bombs, the development of a nuclear-generating plant was achieving results by 1945. The possibility of using a nuclear reactor as propulsion for warships caused the U.S. Navy to set up a Naval Reactors Branch, under the Atomic Energy Commission, located at the Oak Ridge National Laboratory in Tennessee. The program caught the attention of then Captain Hyman Rickover, who got himself assigned to lead the team of scientists and engineers of the branch.  Admiral Rickover would later become known to the world as the “father of the nuclear navy”.

While ensuring an adequate fuel supply has long been a critical logistical consideration in naval operations, submarine capability and survivability vitally depended on a cumbersome system of using diesel engines on the surface to charge the electric batteries needed to drive the ship submerged. To avoid detection in wartime, submarines had to surface during the hours of darkness to recharge their batteries. As methods of detection became more sophisticated, using the cover of night was becoming less effective in avoiding detection.

A submarine powered by a nuclear reactor provided a multi-level solution to submarine propulsion, operations, and tactics. A nuclear sub did not need a large bank of heavy, caustic batteries; it did not need to be refueled at sea (or hardly ever, period); and it did not need to surface, except for crew morale. Without the need to conserve fuel, such a submarine could operate at higher speeds.

In July 1951, Congress authorized funding for the world’s first nuclear-powered submarine. Her keel was laid by President Harry S. Truman at the Electric Boat Shipyard in Groton, Connecticut on June 14, 1952, and the Nautilus was launched in January 1954. First Lady Mamie Eisenhower “christened “the ship by breaking the traditional bottle of champagne across the bow. On another note of presidential history, Lieutenant Jimmy Carter, U.S.N., of Georgia, was one of the officers assigned to the Oak Ridge team that developed the reactor for the Nautilus.

Given the radical, yet-to-be-proven technology incorporated into the ship's design, initially, it was to be unarmed. That decision was reversed, and Nautilus was given the standard armament of its day- six torpedo tubes in the front (the bow), with room to store up to twenty-six torpedoes.

Over the next few years, the Nautilus shattered numerous records in the submarine world, and it soon came time for the ultimate test, but not before the sting of failure was felt before resounding success.

Looking at the long list of revolutionary possibilities a nuclear-powered sub provided to the Navy, in a case of “if you can do it here, you can do it anywhere”, in 1957 it was determined that the Nautilus would try to sail under the Artic Ocean polar icecap.

No other submarine had operated that far north, it was so dangerous as to be inconceivable. Nautilus’ voyage posed new questions and challenges of navigation and human factors, some of which resembled those faced by the future space program.

The first attempt “under the ice” in 1957 was abandoned when both gyrocompasses, essential for navigation for long stretches underwater, failed. The voyage also highlighted some unanticipated issues that needed to be resolved.  In July 1958, Commander William R. Anderson, the second skipper of the Nautilus, ordered their departure from Pearl Harbor, Hawaii, bound for the Arctic Ocean and the North Pole. That goal was accomplished on August 3, 1958, and the submarine finally surfaced near Greenland enroute back to its home port on the East Coast of the U.S. Instead of covering the achievement in layers of Top-Secret classification, the accomplishment was grandly announced to the world.

The implications of what the Nautilus’ 116-man crew had achieved were profoundly wide-ranging. The successful launching of the very first Earth-orbiting satellite, Sputnik, by the Soviet Union in 1957 shocked the American public. In the world’s perception. Nautilus put the U.S. solidly back on top in technical achievement. Overnight, the use of non-nuclear-powered subs, at least for long-range missions, became obsolete. In just a few years’ time, the development of intercontinental nuclear-tipped missiles combined with the capabilities of nuclear-powered submarines led to the newest and most effective leg in the U.S. nuclear deterrence strategy of land and sea-based missiles and nuclear bombers. Nuclear-powered attack subs soon became a feared threat to any navy.

Although considered a warship, Nautilus operated essentially as a test bed for the rest of the nuclear subs that were soon built after her, and for developing and exercising new antisubmarine warfare systems and tactics as the Soviet Union eventually produced nuclear-powered submarines of their own.  Befittingly, she did actively participate in blockading the island of Cuba during the 1962 Cuban Missile Crisis.

The U.S.S. Nautilus remained in service until 1979 until taking on a new life as a submarine museum. The U.S.S. Nautilus is now gracefully retired as the featured attraction at the Submarine Force Museum in Groton, Connecticut. She is also designated as a National Historic Landmark.

About the author Terrance Lloyd:
Terry Lloyd has been a freelance journalist and writer since 2019 after 40 + year aviation career. He has had articles published in the areas of aviation, military history, and firearms. He is an Air Force veteran and has lived and worked across the U.S. as well as Asia, Europe, and Central America. Twitter handle: @TLWriteStuff01